Just over a week ago I went to explore the Nantlle Ridge in Snowdonia with my brother Chris. I have often looked at its distinctive skyline from the southern shores of Anglesey and often wondered what the view would be like from up there. Many years ago I had an epic climb at Cwm Silyn but missed out on the view as we completed the last pitch in the dark! 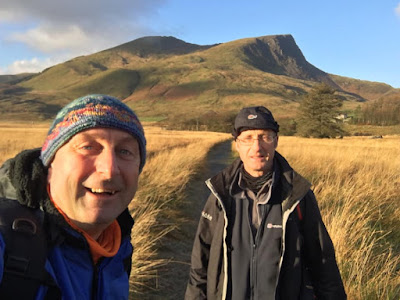 This time we fully intended to complete our activities in daylight hours. We parked at Rhyd Ddu and made our way to the buttress that leads steeply to the summit of Y Garn. The winding path ends up being quite hard work but as we quickly gained height, the views down Nant Colwyn towards Beddgelert combined with a little 'summit fever' spurred us on...

The summit was bleak, misty and strewn with cobbly rocks. Every now and then we got a brief murky view across the Menai Strait to southern Anglesey.

The route to the next peak, Mynydd Drws-y-Coed was along a wind beaten rocky ridge with slimy rock with ice patches. Before complaining we reminded ourselves that we had set out wishing for an adventure. Perhaps we weren't careful enough with our wishes. 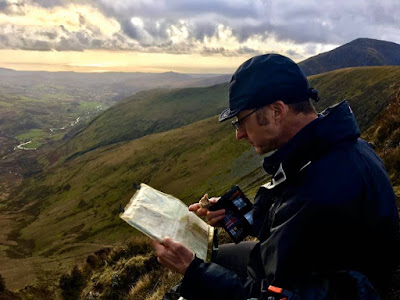 Easier ground led us to Trum y Ddysgl. We descended down a steep narrow ridge and found a sheltered spot in the sun to stop for lunch. The view to the south was idyllic with the Afon Dwyfor glistening with the reflections of the golden winter sunshine. That valley is called Cwm Pennant and its beauty is immortalised in a well-known poem by R Williams Parry. The poem ends with the the famous sentiment that roughly translates as, "Oh Lord, why did you make Cwm Pennant so beautiful, yet the life of a shepherd so brief?" 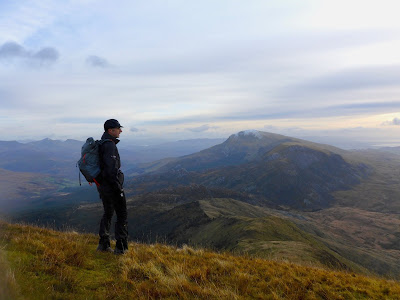 After lunch we climbed to the nearby Mynydd Tal y Mignedd to investigate the monument at its summit. It was built to commemorate the diamond jubilee of Queen Victoria. As the sun was sinking lower in the sky we sensed that it was time to return route. We headed back to Trum y Ddysgl and began our steep descent along a steep ridge that runs south-east towards Beddgelert Forest. 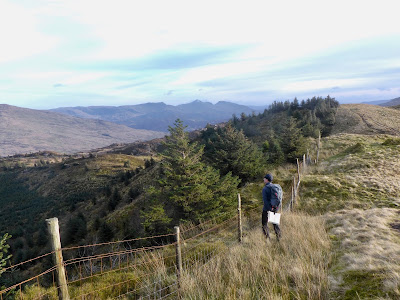 The walk through the dark mossy forest completed a day full of variety with steep paths, slippery scrambling, amazing views, a Victorian monument and a touch of adventure. 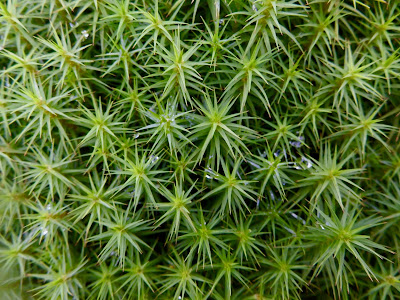 My thanks to Chris for his company on my second visit to the Nantlle Ridge but this one was completed in daylight and we were back in time for tea!