Skerries in the Mist

Following the great rains of Saturday, I joined members of Liverpool Canoe Club on a trip out to The Skerries off the North West coast of Anglesey. We launched at Cemlyn Bay where there was a gentle breeze and the sun was shining brightly. 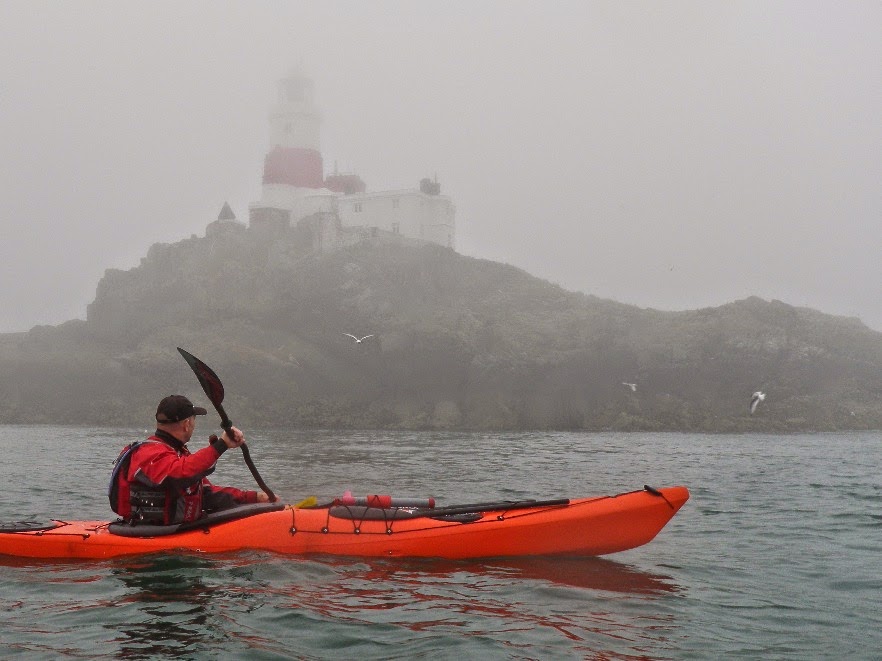 As we left the bay we noticed the The Skerries were missing! We paddled into mist and dense fog patches. These weather conditions kept us guessing and focused on our navigation skills. However, past training and practice paid off as the islands loomed out of the gloom with around a kilometre to go. Life on The Skerries is as hectic as ever. Most of the young Arctic Terns have now fledged but parent birds are still being kept busy feeding some of the younger ones. 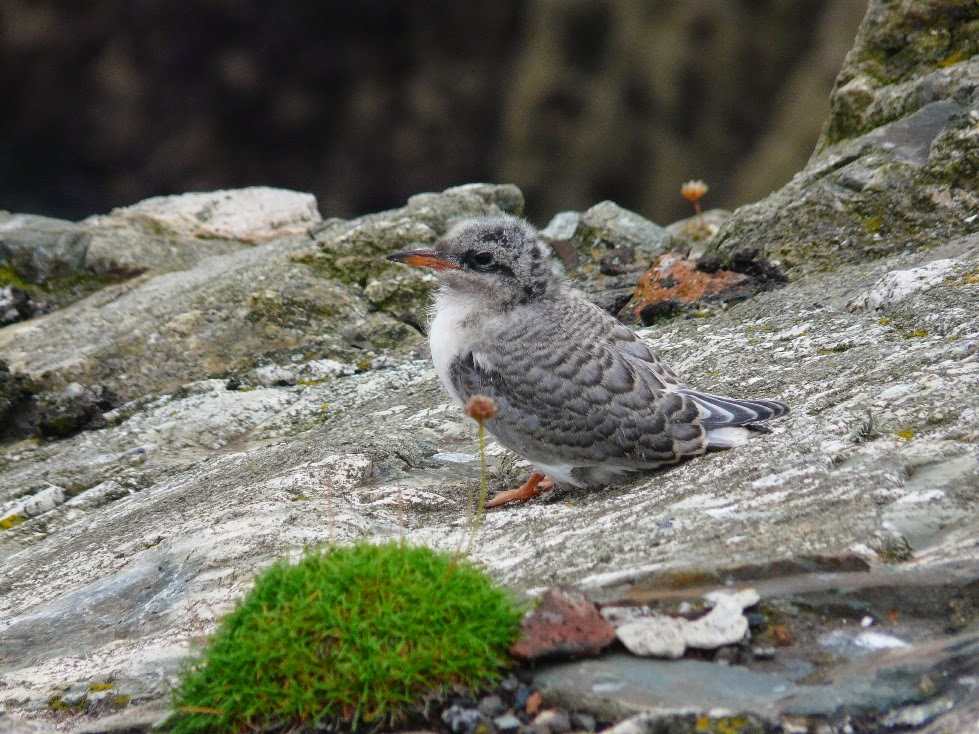 A handful of chicks have yet to get their flight feathers. These late comers to the party will have to grow up fast if they are to be strong enough to make the long Autumn migration to the South Atlantic in the next 4-6 weeks. 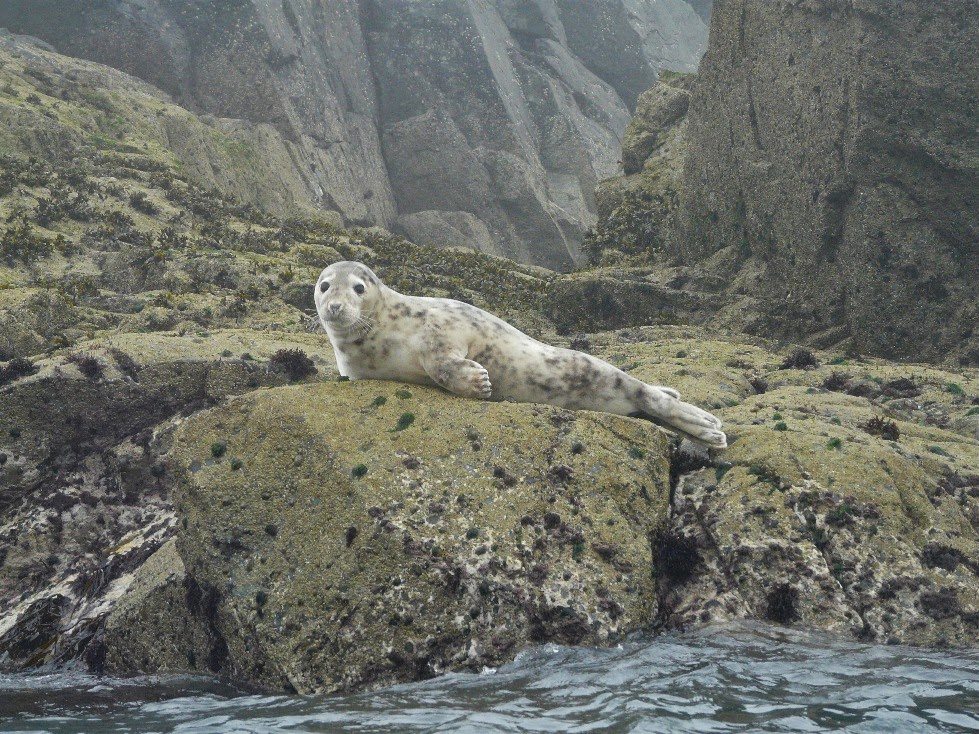 In the meantime, life in the waters and around the rocks is busy for the seals. There was hardly a dull moment as we were escorted off the premises by several of these playful, inquisitive sea creatures. 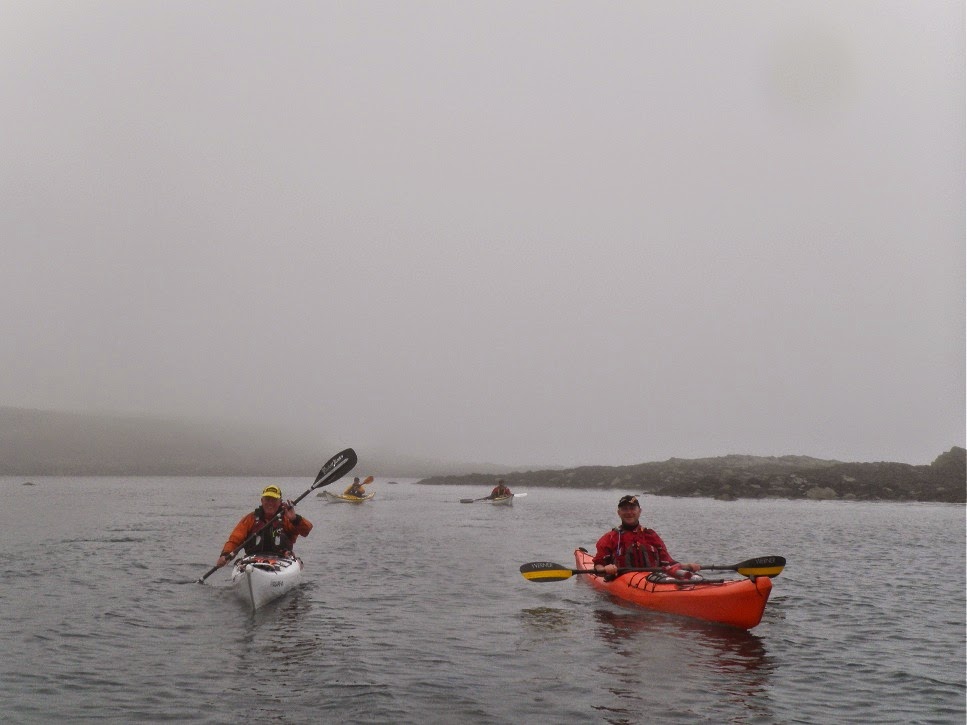 The mist and fog patches remained for our return crossing. As we arrived back at the Anglesey shoreline, we took the opportunity to explore the gullies and channels that lead the way from Hen Borth to Cemlyn Bay. Many thanks again to my friends at Liverpool Canoe Club for their company over the weekend.


Posted by Jim Krawiecki at 7:31 am No comments:

A return to Bardsey

Trevor an I set off from a misty scene on Aberdaron beach. Initially we headed fro the East side of the bay where we found some entertaining paddling in the caves and amongst the rock gardens. 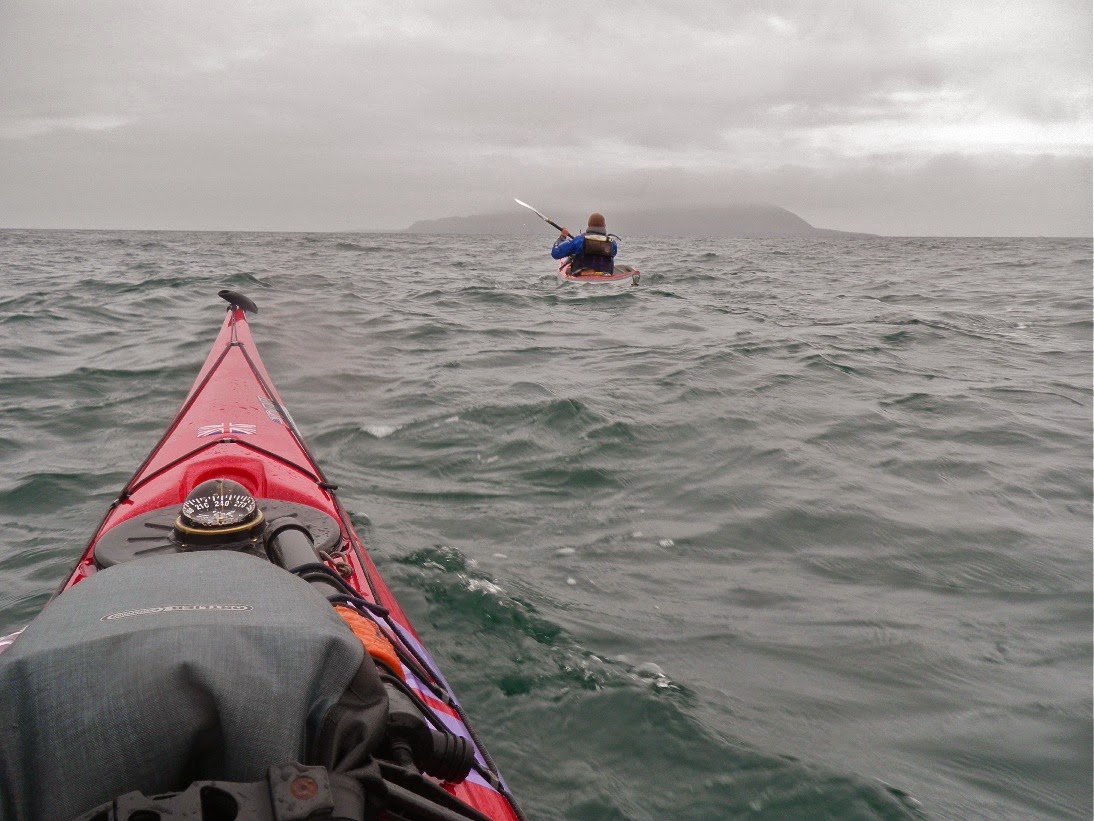 The poor visibility gave us some concern about the 7km crossing to Bardsey from Ynys Gwylan Bach. In addition, we would be dealing with strong currents generated by strong spring tides.

During the crossing we were entertained by local puffins and spectacular aerial displays of Manx shearwaters as they glided across the sea around us, skimming the tops of the waves. I'm sure they were playing a game of 'dodge the kayak' flying to within feet of our bows. 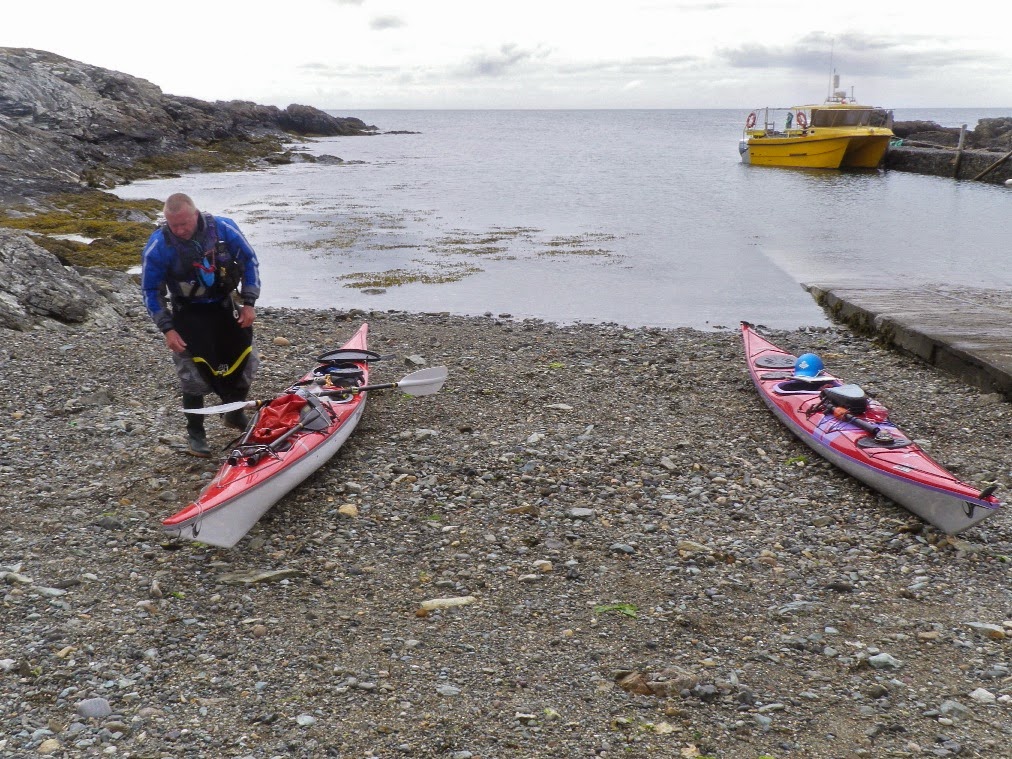 The crossing took more time and effort than we expected. We were reminded that the crossing to Bardsey is one of the more challenging sort crossings in the UK. 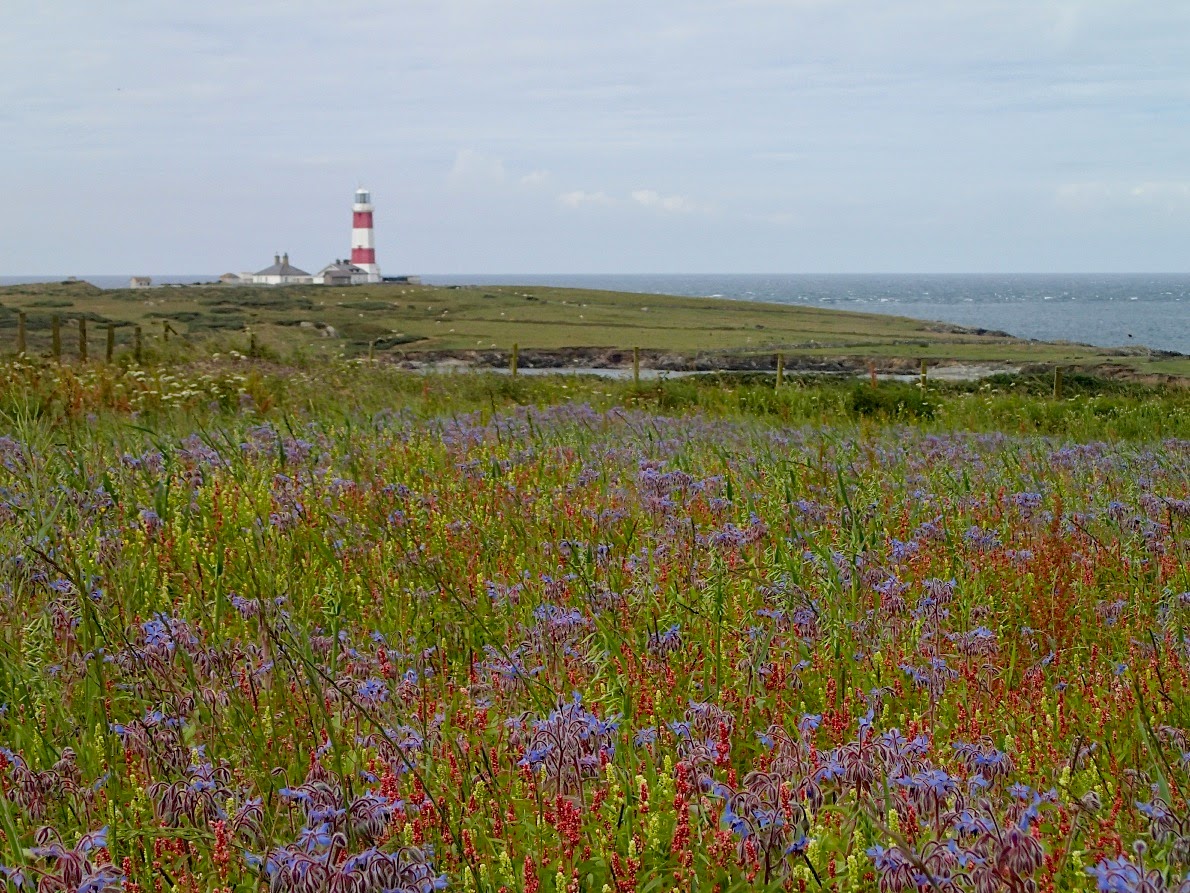 Down on the western pastures the sheep shearers have been and the hay has been cut too. However, one of the fields has been left as a spectacular summer meadow. 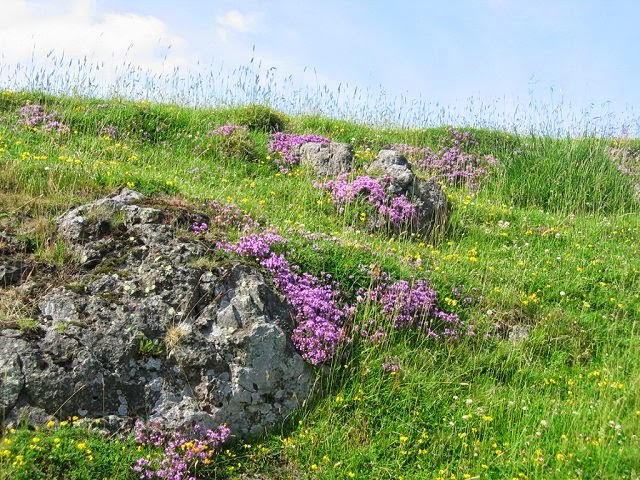 Walking along the summit ridge of Mynydd Enlli, we were treated to yet more wild wonders. Mountain thyme is now in flower among the rocks, peregrines are busy feeding their young on the young of other unwary parents and the local gang of adolescent choughs are up to no good as usual.

Our return to Aberdaron was far more straight forward in good visibility and glorious sunshine.
Posted by Jim Krawiecki at 8:08 am 1 comment: