A week on the Northumberland Coast

I spent last week staying at Beadnell on the Northumberland coast. Most of this coastline is designated as an 'Area of Outstanding Natural Beauty' and is littered with nature reserves and Sites of Special Scientific Interest (SSSI). 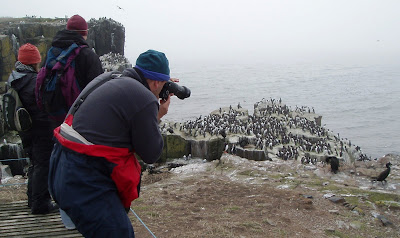 Among the areas I visited was 'The Farne Islands' where the summer bird nesting season is just starting. 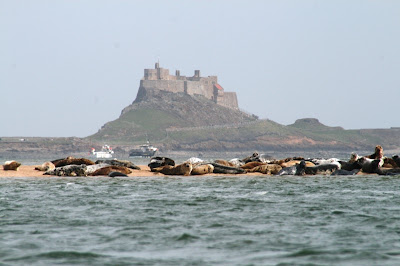 I also visited the Holy Island of Lindisfarne and managed to see some of the hundreds of seals that haul out along the extensive sandy beaches. Lindisfarne is an important historical site with its ancient priory and defensive castle. 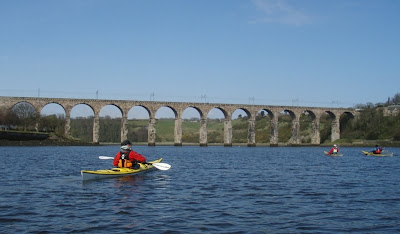 Just along the coast close to the scottish border lies the town of Berwick upon Tweed. I met up with Ollie Jay who runs his own canoe and kayak guiding and coaching business called Active4seasons nearby. Paddling with the flood tide up the River Tweed I learned a great deal about the local history, battles past and present, won and lost. There are plenty of small museums in the town and even one that is dedicated to local fishing history on the scottish side of the river at Paxton House.
I shared my accommodation with Richard and Ron who are two other sea kayakers with excellent local knowledge. We stayed in a good quality basic en-suite room at Farne Diving Sevices 200 metres from the sea in Beadnell Village. 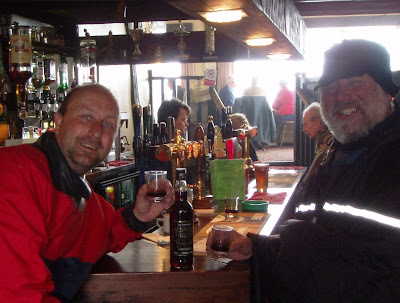 The Northumbrian coast has so much to offer I'll have to return to take more of it in, and not just the coastline. Food and drink here is excellent! Kippers from Craster, Mead from Lindisfarne, and Alnwick Rum along with 'fish and chips and fine local ales all played their part in a week of adventure along the Northumbrian Coast.

There more photos to view here 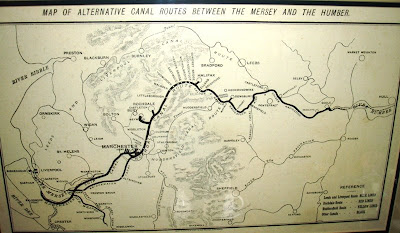 A few weeks ago Sean and I paddled and Portaged our kayaks from Stretford to Littleborough along the Bridgwater and Rochdale Canals. We will leave the 'Summit' section for another day. In the meantime Kirstine and I embarked upon the following section of the Rochdale Canal between Todmorden and Sowerby Bridge, to continue along the Calder and Hebble Navigation towards Wakefield.
We began our first afternoon's paddling a mile or so to the east of Todmorden with just a 4 mile section to go before meeting our friends Lisa and Frank with whom we would stay for the night at Hebden Bridge. 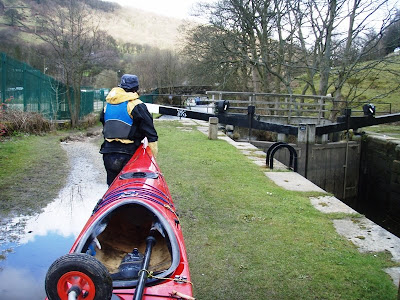 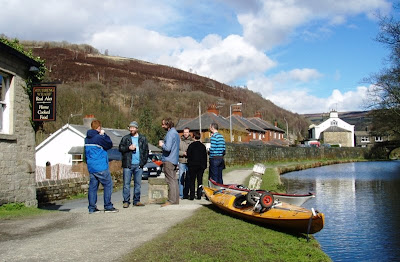 There were 6 locks to portage which was thirtsy work, thank goodness for canalside pubs! 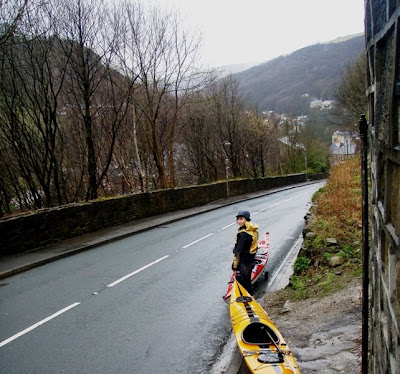 The weather on the first day was pleasant enough but Sunday morning brought us sleet and drizzle and the prospect of 12 miles and 11 locks. The early start was painful but sadly essential. 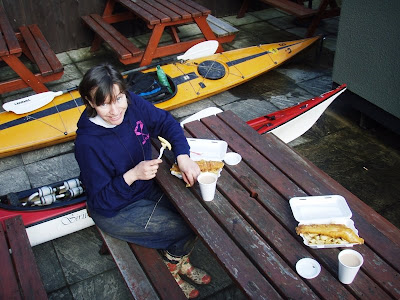 The weather improved gradually throughout the day and by the time we arrived at Brighouse the sun came out an we celebrated our arrival with some good old Yorkshire fish and chips. 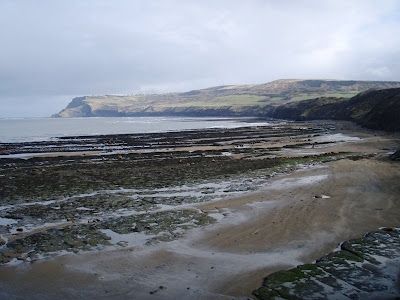 The previous day's rain had brought the river levels up beyond safe limits on the River Calder sections below the Brighouse Basin locks so we decided that this would be the end for this particular paddling trip. Instead I collected the car from Todmorden and we used our remaining day with some walking along the Yorkshire coast at Robin Hood's Bay and Flamborough Head.
Posted by Jim Krawiecki at 4:28 am No comments:

When it comes to paddling in nice scenery you cannot beat an estuary that hosts thousands of ducks, geese and wading birds; has a mysterious island and a backdrop of snow dusted peaks. 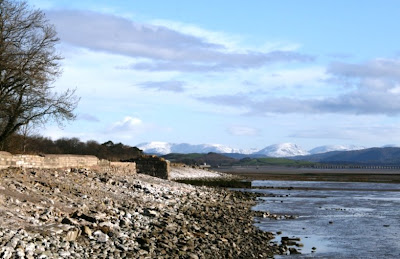 The Leven estuary is on the south Lakeland coast close to Ulverston. This may not be one of the classic sea kayaking destinations but has provided a wonderfully varied day out on the water.

I was shared my journey with: 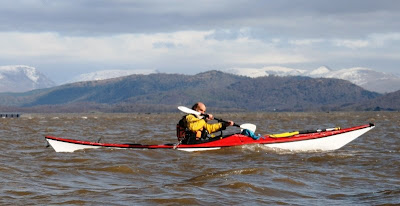 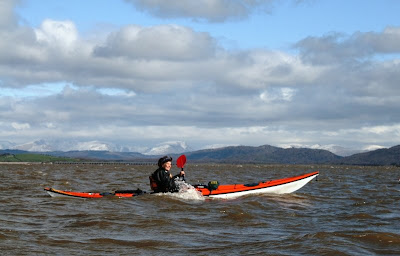 We waited for the notoriously fast tides to rise then beat a fast passage into the middle of the flow so that we could take a closer look at Chapel Island. 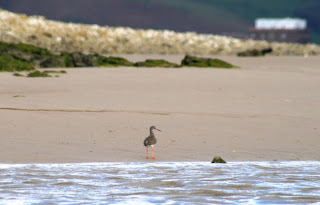 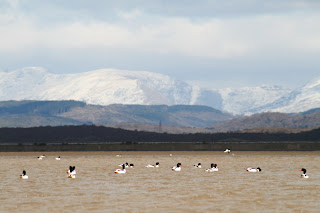 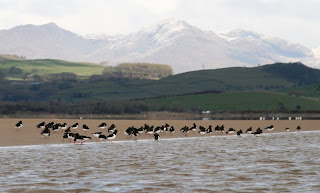 ......and hundreds of Oystercatchers. 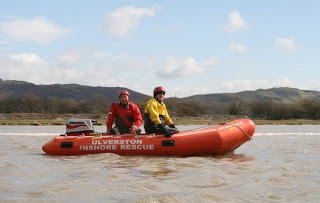 Leaving the island behind us we encountered more lively conditions caused by the northerly wind blowing against the rising tide as we approached the railway viaduct. In the higher reaches the Ulverston Inshore Rescue crew came to say hello before heading back for their base. 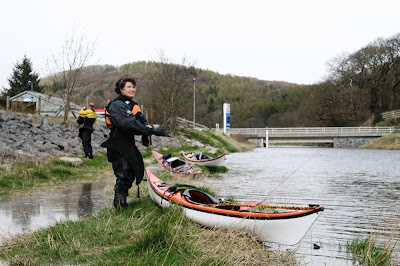 We stopped briefly at Greenodd where the River Crake meets the estuary for a well earned butty break. In the past I have paddled to this point from Lake Coniston, down the grade 2-3 rapids of the River Crake. 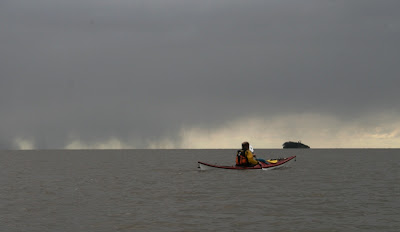 We started back shortly before the tide turned in order to minimalise the possibility of becoming grounded on sandbanks. Some scattered snow showers soon took the warmth of the spring sunshine away and brought cold squalls amongst which I was pleasantly surprised to see half a dozen House Martins dodging the flakes. 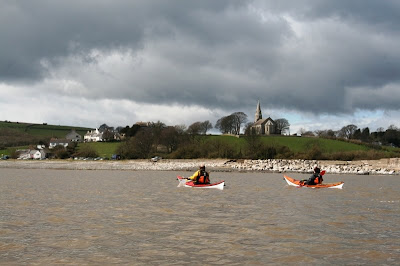 Our return was perfectly timed just as the first of the mudbanks at Bardsea were becoming exposed. After carrying our boats a short way up the shingle beach there was time to have a cup of scalding hot tea before starting the journey home.

There are some more photos of the day here.

Posted by Jim Krawiecki at 7:03 pm No comments:

Head for the hills - The Rochdale Canal

As a keen hillwalker I often head for higher ground in search of arduous challenges and breathtaking views. This trip would provide a different challenge. The aim was to get from my house to the Yorkshire border by kayak.

Sean and I wheeled our sea kayaks through the streets to the Bridgewater canal where it passes close to my house at Stretford in south Manchester. We Started paddling shortly before 8-30am. 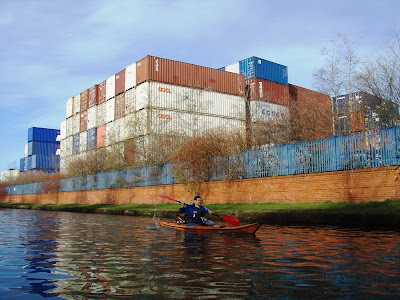 Paddling through Stretford we passed the backs of terraced housing, industrial estates and container storage areas before making our way beneath the towering framework of Manchester United's Old Trafford stadium.

The architecture on the approach to the city centre is a stark contrast of old and new. Scrap metal yards with dilapidated mills remarkably remain beside the latest designer tower blocks with their balconies of pressure treated timber, stainless steel and shiny self cleaning glass. I can only imagine that the old buildings have been left as somewhere for the pigeons and rats to live. 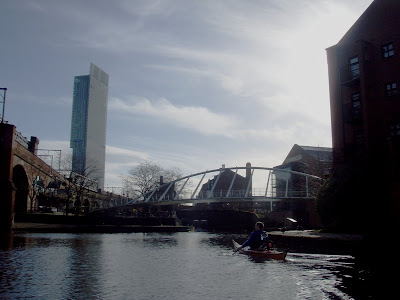 Castlefield basin is where the Bridgewater Canal meets the Rochdale Canal. Residents of the desirable canal side housing are well served at the nearby trendy bars and restaurants. One such establishment takes its name from the lowest (final) lock on the Rochdale Canal. Dukes lock is the 92nd and marks the first step in our arduous uphill battle. Before long we began to see how the others live. 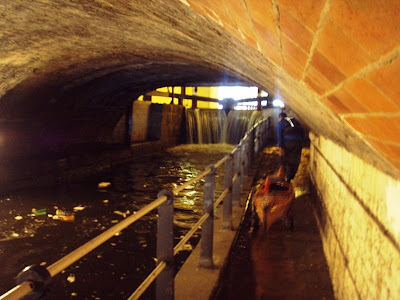 The many tunnels and arches beneath Manchester city centre are used for overnight shelter by the homeless and the putrid stench of stale urine urged us to move swiftly on.

Our elation at escaping the city's claustrophobic confines was short lived. Within the city we portaged a series of locks known as 'The Rochdale Nine' only to find that this canal has an average of 3 locks per mile all the way to the summit! We were happy to use trolleys to portage flights of two or more locks whilst we carried our kayaks round single ones. The most irritating is a combination of locks with short stretches of less than 300 metres. Hardly worth paddling, difficult to portage.

On the north side of the city lies the suburbs of Miles Platting and Newton Heath. This stretch of the canal has recently been re-opened here. Boarded up council houses have yet to make way for designer apartments here. Feeding generous chunks of thick, square, white bread to the ducks and geese is as popular as ever but on our arrival amongst the Asian communities of Oldham the square white loaf of 'Mother's Pride' fame is replaced by last night's left over chapati and naan. 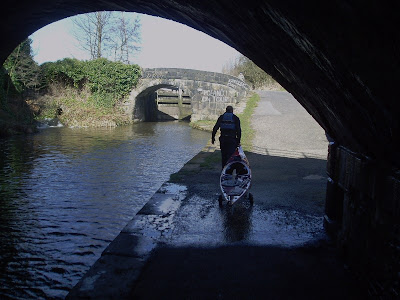 Soon after we passed beneath the M60 motorway we found more rural surroundings north of Chadderton and a gruelling flight of locks at Slattocks. (photo - Sean Jesson) 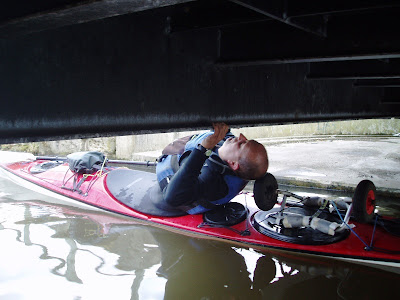 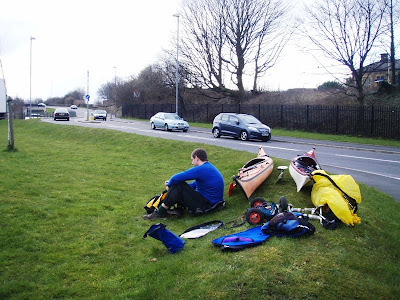 Finally, at 4-00pm, having travelled 35km and portaged 42 locks we decided we'd had enough. We finished at Littleborough, 4km and 3 locks short of the canal summit and the Yorkshire border.

This week my friends Justine Curgenven and Barry Shaw have completed an amazing circumnavigation of New Zealand's South Island - I'd like to extend my congratulations to them!
Posted by Jim Krawiecki at 7:20 pm No comments: