A Windswept Isle of Man

This being the earliest Easter for many years I should have not been surprised at the weather we encountered on this kayaking trip to the Isle of Man. Having booked the high speed ferry from Liverpool the Isle of Man Steam Packet Co. contacted me a further two times to inform me of changes to the crossing due to forecast winds of up to force 10 in the Irish Sea. Peter, Glen, Chris and I eventually left on the overnight boat from Birkenhead and after a gut churning crossing we disembarked and took breakfast at 'The Caff' in Douglas. 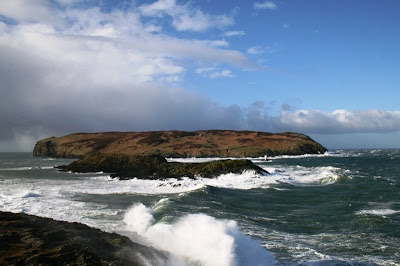 The wind had not abated so we started our tourist trail with a look at Calf Sound. With huge waves breaking onto the jagged shoreline there was clearly no paddling to be done here today. It was unlikely we could have taken our kayaks from the roof racks without causing injury to ourselves or damage to the boats or cars.

The chilly arctic blast blew us to what would become our base for the trip. 'Ballabrooie' is home to the Tastagh family and the base for Keirron's 'Adventurous Experiences' kayaking, climbing and coasteering business. As ever we were given a warm welcome washed down with plenty of tea. 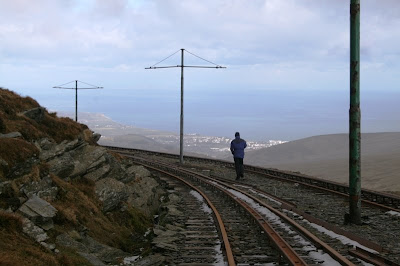 Eager to make the most of the day and to stave off inactivity we headed inland to view the Island from its highest peak. Snaefell stands 621 metres and offers splendid views over much of the Isle of Man, and beyond to Northern Ireland, Scotland, England and Wales. 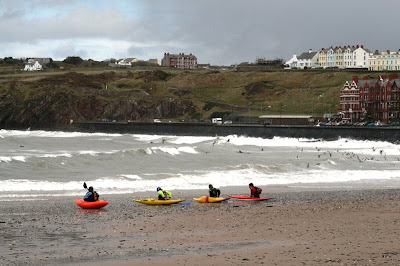 In search of more maritime entertainment we returned to the coast at Peel where we stumbled upon a bunch of surfers and kayakers relishing the arctic conditions. 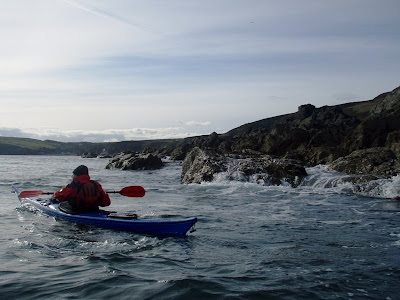 Saturday brought a little in the way of change in the relentless north or northwesterly winds. With a decrease to force 5-7 we decided to have a go at some of the east coast. Following an aborted attempt to paddle south from Port Mooar we decided more shelter would be better found further south at Port Grenaugh. Peter and I paddled northeast to Port Soderick and beyond to Little Ness. The Rockhopping and squally down draughts from the tall cliffs kept us entertained for the remainder of the afternoon. 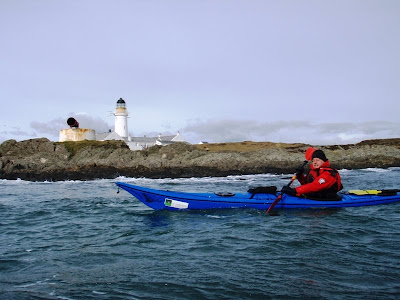 Easter Sunday Peter and I felt that the wind had abated enough for us to make our way around the low lying Langness Peninsula, across Castletown Bay and into Port St Mary. After an easy start with plenty of enjoyable rockhopping and some fun in the overfalls the finish was to become one of the coldest and most testing paddles I have done for some considerable time. Whilst crossing Bay ny Carrickey we were tenderised by squally force 6+ winds with sleet and hail. Relief at arriving in the comparative shelter of Port St Mary was marred by the painful procedure of removing my frozen fingers from my paddle. 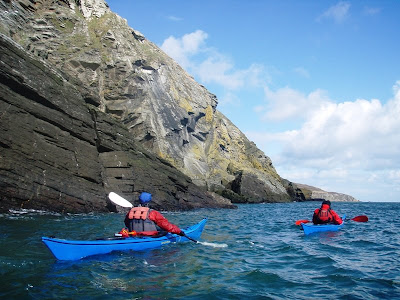 Monday brought the four of us together to repeat the paddle from Port Grenaugh to Little Ness and back and indulge further rockhopping adventures. The wind strength and direction had not changed giving us precious little option and as the afternoon wore on gusty down draughts became an increasing feature in the day's entertainment. 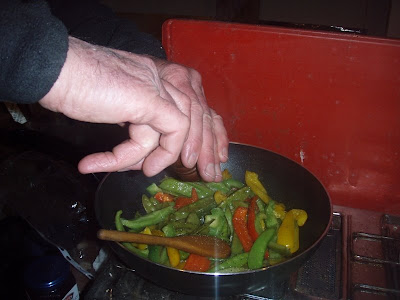 Keirron had been kind enough to spare us an arctic survival course and rather than leaving us to camp in the field he allowed us to stay in what will be his new lecture room. This gave us the opportunity to get warm and dry, enjoy a reasonably comfortable existence and enjoy the results of Peter's culinary expertize. 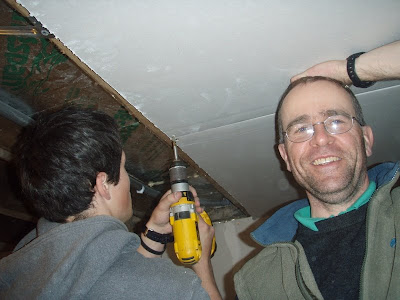 Before leaving for the ferry on Tuesday morning we chipped in with some Polish style 'flying labour' to help out with the completion of the lecture room.

There are more pictures from the NWSK Easter trip to the Isle of Man here.
Posted by Jim Krawiecki at 4:04 pm 2 comments:

Its all Glen's Fault!

He asked me if I would help him test drive a sea kayak that he had his eye on. Glen is planning to do some sea kayak racing in the forth coming season and believes he has located a suitable craft. This 'Orcadian 2' kayak needs two people! I sometimes paddle an Aleut 2 double kayak which is big, stable, maneuverable and forgiving. 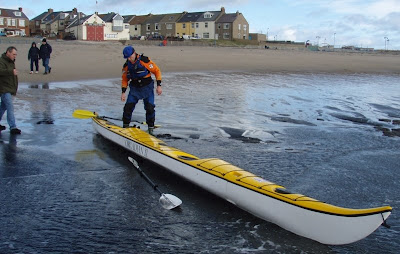 I'm not sure if it was the adverse weather conditions, the unusual nature of the craft, Glen's inexperience at the helm or a combination, but our short sea trial at Newbiggin ended with a broken rudder cable and a sense of "Phew!" when we landed through the short dumping surf. Afterwards we were treated to a tour of the local lifeboat station where we gained a sense of, "Don't worry, we had you covered!"

We left the boat for the potential vendor to nurse back to health and headed even further north to the new bunkhouse at Chatton Park Farm. The bunkhouse comes well recommended, especially as there is a fine pub only 10 minutes walk away.

We failed to generate a substantial hangover so following a rigorous pre-breakfast constitutional, hearty breakfast and short drive to Boulmer we engaged the sea once more.

The morning's conditions favoured a journey north until lunchtime when the turn of tide would lead us to head south and finish where we started. Our first stop was Craster, famous for Kippers, but also has a pub and a quaint harbour. 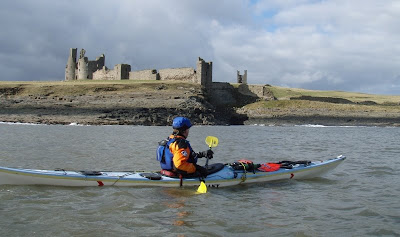 Dunstanborough Castle stands mighty and strikes fear into the hearts of potential invaders. We moved on..... 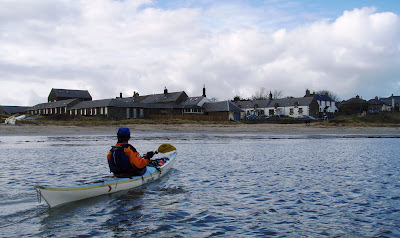 Low Newton has a pub so friendly and well stocked with fine ales and food that we couldn't bear to stand in the lengthy queue. We settled for a couple of mouldy flapjacks from my drybag and some tepid coffee from Glen's thermos.

We made haste on the return to Boulmer for fear we might be ravaged by the approaching boisterous weather and the farmer had warned us that his cows like to nuzzle wing mirrors on the cars parked in his conveniently positioned field.
Posted by Jim Krawiecki at 7:37 pm 2 comments:

A Great way to begin plotting and scheming trips for the coming spring and summer months is to have a bit of a get together with your mates. The best venue to be found so far is the 'Anglesey Outdoors' centre. There are plenty of varying paddling areas suitable for different paddling abilities allowing for most weather conditions. There is also a homely bar called 'The Paddlers Return'.

The Paddlers Return Bar makes for a suitable rendez-vous for meeting up on the Friday evening. Following a hearty breakfast in the centre we split into 3 groups. One group went to the Menai Straits I paddled with another group from Moelfre on the east coast hoping for shelter from the force 7-8 winds. The remaining paddlers remained land bound with walking boots as their weapons of choice for the day. 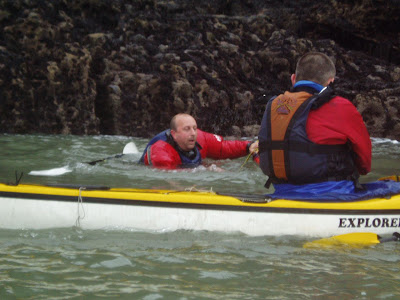 I was indulging in some rockhopping on the return from Red Wharf Bay to Moelfre when I edged that bit too far on a sharp turn. My surprise at losing balance on flat water led to woefully inadequate attempts at high brace and roll. Whilst I was gasping for air and rapidly losing dignity my paddling pals were gathering with laughter and cameras. 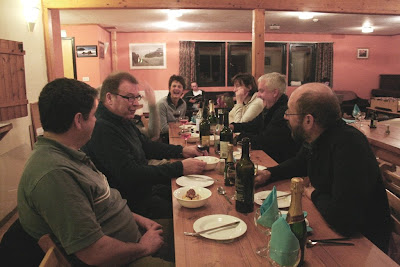 The evening entertainment was splendid as ever! Snowie created a hearty 3 course meal for us, which was followed by an excellent slide show provided by Kev. Kirstine is to hold the 'Polish Association of Reluctant Paddlers - Award for Aquatic Excellence' for a lengthy swim near to Ardnamurchan last summer. 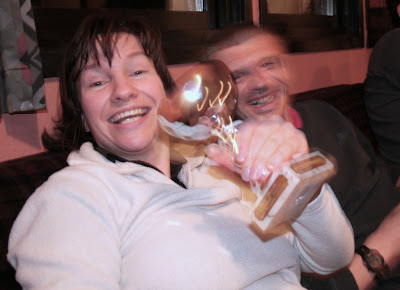 Before leaving Anglesey on Sunday some of us headed off to Bull Bay whilst others took the easier option of engaging some terrific surfing conditions a Trearddur Bay. 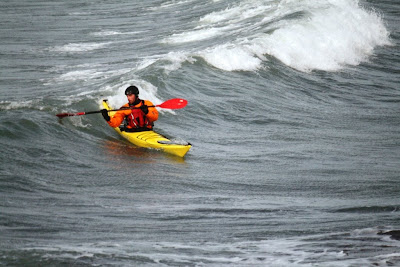 Posted by Jim Krawiecki at 10:09 pm No comments: