Last week I took part in a unique voyage that linked the Irish Sea with the North Sea via the inland waterways network of northern England. And what a treat it was! The trip started near Crosby at the Mouth of the Mersey Estuary. At Runcorn the route followed a historic trading route through Manchester along inland waterways across the Pennines before reaching the Humber Estuary at Goole. On the Humber the route passes Hull and after 8 long days finished at the historic lifeboat community at Spurn Head on the North Sea Coast. 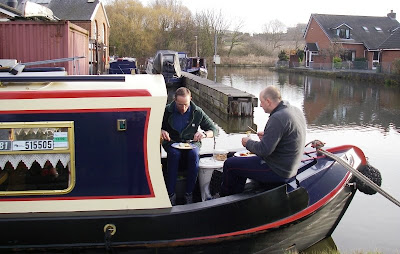 We stayed mostly in various accommodation including one night on a narrowboat and another in a lighthouse owned by an eccentric artist. The scenery was varied too. Once away from the windswept coast the rolling Cheshire countryside was soon replaced by industrial structures and inner city chaos of Manchester. The heights of the route (600ft above sea level) were adorned by the surrounding moorland and crags that mark the Lancashire - Yorkshire border.

The people we met were equally varied. On separate occasions a pub landlord and a Dog walker were instantly moved to hand over donations there and then. 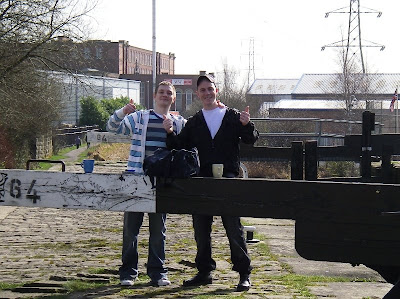 One character from a group of threatening looking youths recognised me as being Polish, produced a small plastic cup and poured me a generous slosh of vodka. He insisted I looked cold and needed a ' likkle sumfink' to warm me up.

The 182 mile journey involved portaging around 140 locks (I haven't counted them all yet) with many days on the go for 9-10 hours. Not surprisingly one of us took a little time out due to tiredness, injury or illness. The one exception was Jean who instead of accepting a lift around a 5 mile impass on the Calder and Hebble Navigation, chose to get up early and run it in an effort to keep a sense of completeness to the coast to coast journey.

The Kayak Coast 2 Coast blog describes the build up to the trip and includes a day by day account. Have a look and if you feel moved enough you may consider making a donation to our charitable cause.
Posted by Jim Krawiecki at 8:34 am No comments: