Throughout the preparations and during the trip we filmed our adventures. Way back in February we shipped out a P&H Scorpio packed with goodies. This was a mini adventure in itself and was documented in the movie 'Shipping Out'.

At Easter most of the gang met at Arisaig to get to know each other and paddle together along the Knoydart coast. Although the weather was not all that good, we had a great time and created the movie 'Paddling the Mists of Knoydart'.

Now that we are back we have a collection of short films that make up a three part mini series...

Part One: 'The Journey to Greenland' is all about how we came to arrive in Tasiilaq via Iceland.

Part Two: 'Heading North' The adventure continues as the expedition team heads north towards the Knud Rasmussen, and Karale Glaciers where they calve dramatically into the sea.


Part Three: 'Wind Ice and Fire'. In the final episode the expedition team heads into icy Sermilik Fjord. They find whales (dead and alive), have problems with strong winds and hear tall tales around the campfire.

East Greenland is an amazing place. The scenery, the people and the ice make it a perfect place for a kayaking adventure.
Posted by Jim Krawiecki at 2:44 pm No comments:

During The Anglesey Storm Gathering in October 2011 I met Martin Rickard who runs kayak expeditions to east Greenland. I had been planning to return there since my first trip in 2007. Martin has a fleet of boats based in Tasiilaq and his laid back guiding style leaves you with the impression that you are running your own expedition. 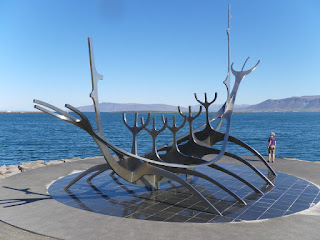 A total of eight paddlers met up in Reykjavik, Iceland in early July. Five of us from North West Sea Kayakers and the other three (including Martin) from Shetland. 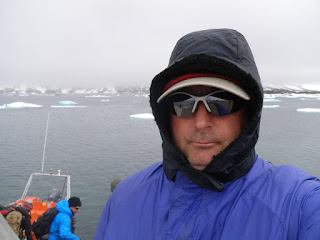 From Reykjavik, we flew to the dusty gravel airstrip of Kulusuk in east Greenland. Our flight had been delayed by almost two hours due to fog at Kulusuk, which is a common problem. 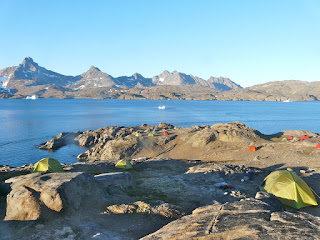 Our boat ride from Kulusuk to Tasiilaq was also delayed but eventually we arrived at a warm and dusty campsite between the helipad and the rubbish tip. 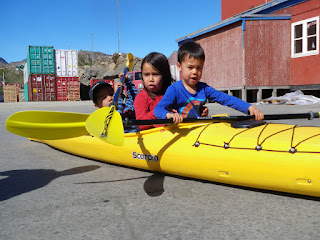 The jobs for the next day were all about getting kayak and kit ready for the off. This included collecting the kayak that we had shipped out earlier in the year. 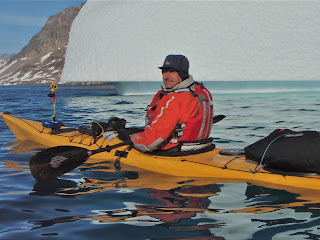 Finally after we had crammed and squeezed everything into and onto our kayaks we headed off into the east Greenland evening sunshine to our first camp. 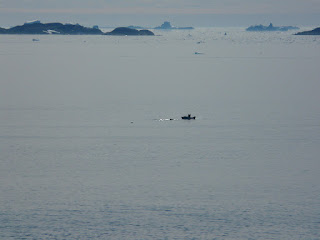 The next morning we woke to the sound of whales breathing in the calm waters beyond our camp. Whilst exploring the nearby hillside we found and old settlement long abandoned with the remains of turf houses and partially collapsed burial cairns with human bones inside. 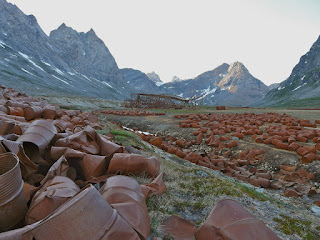 Over the following days we made our way north through a network of Fjords and channels. We were aiming to reach the Rasmussen and Karale Glaciers. On the way there we camped at a place where there is an abandoned US Airforce base. The gravel runway remains a broad, flat and expansive place although it is becoming slowly colonised with tundra plants such as arctic willow and proves popular with the ringed plovers that have taken up residence. 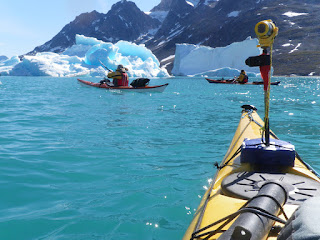 As we continued north it grew colder and colder. Entering the basin of the Karale Glacier was like padding into a frozen amphitheatre. Huge icebergs punctuated this emptiness. 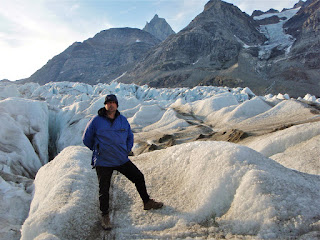 We camped on a smooth outcrop, strolled onto the spiky surface of the glacier and stared open mouthed at the might of the icy wilderness. 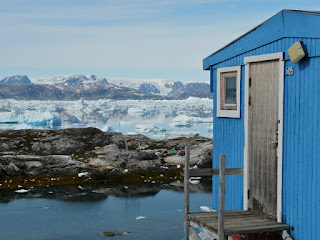 In the following days we headed west towards the town Tinitiqelaq and Sermilik Fjord, which was full of ice. 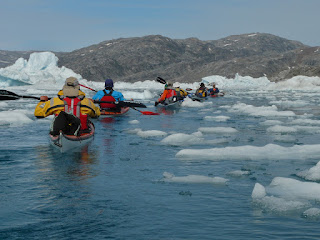 We dodged the bergs and floes and beat our way through the brash ice. The easiest landing was on a low, flat 'tennis court' sized ice floe. 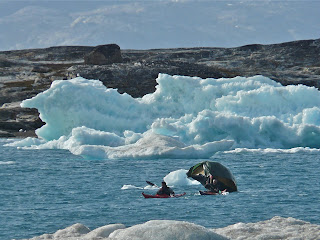 Later the wind changed to a strengthening offshore breeze. This prompted us to quickly land and find somewhere to camp. The wind grew stronger as we pitched our tents. A wild gust took one of the tents from its ledge, into the air and down onto the sea. It landed perfectly upright on the water and being of a free standing design, remained that way, but gently drifting out to sea. As it left the shelter of the immediate shoreline it began to tumble and cartwheel. As it accelerated spectacularly into the distance, three of us gave chase. It was eventually retrieved relatively unharmed having blown over a kilometre out into the fjord. 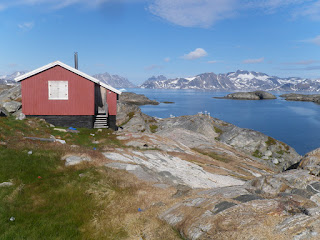 The remaining days took us back into Amassalik Fjord and back to our base camp at Tasiilaq. It felt as though the expedition was drawing to a close. We consoled ourselves by exploring a recently abandoned village now used as a winter dog sledding base. Followed by a beautiful camping location from which we watched whales spouting in the fjord. 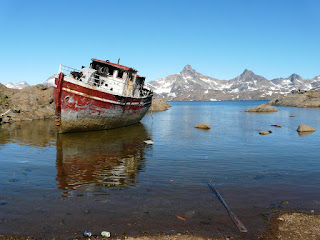 Strong winds kept us from entering Tasiilaq harbour until mid-evening on our last paddling day. The following day was spent cleaning out the kayaks, shuffling round the dusty town and reminiscing about our wonderful adventure.

Thanks are due to Martin, Jules, Dave, Chris, John, Stephanie and Kirstine for their company. I'd also like to thank Clif Bar, P&H Custom Sea Kayaks, Mitchell Blades, Peak UK and F-Stop Gear for their support.


Posted by Jim Krawiecki at 9:02 pm No comments: