There is always a fascination in paddling across a significant body of water like a lake, large bay or a sound to a small group of intriguing islands. Such fascination is greatly increased when the destination is a different country. I stood on the promenade at Silloth gazing across the estuary to Criffel, the most obvious hill to view, and imagined that the word 'Scotland' ought to be visible on its southern slopes. 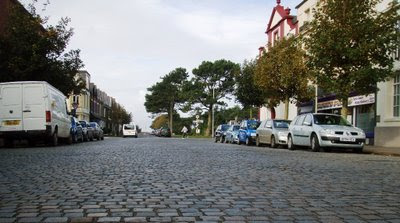 Sean and I started our crossing on the slipway in some ungainly fashion beside the lifeboat station. I only managed a successful second attempt after getting some welcome assistance from an onlooker. His ribs were no doubt aching having witnessed my first attempt. 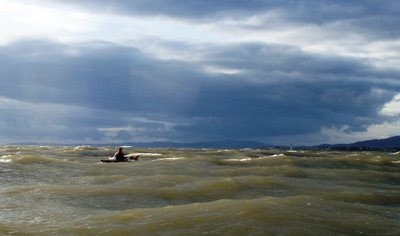 The crossing was un-eventful if a little choppy and despite paddling into a stiff breeze we arrived at Southerness in around two and a half hours. We had originally planned to go further west to Hestan Island but failing light, the strong westerly and my tiredness strongly suggested we camp at Southerness. 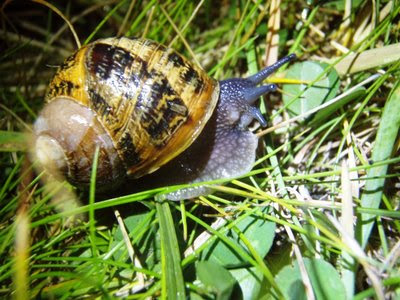 After dark we were kept entertained by the local moluscs by candlelight.

By the morning I had come down with a well defined cold and my appetite for exploring had disappeared. The wind had also increased so we opted for the quickest route back to Silloth.

After a long carry down to the waters edge the crossing started as un-eventful as the day before, but all that changed after we had covered 4km. A line of foaming waves leapt about like a tribe doing a war dance, daring us to approach English shores. The exceptional spring tide generated confused seas around the sandbanks in the middle of the estuary. Huge breaking waves were all around me. I could only catch an occasional glimpse of Sean 20-30 metres over my right shoulder. One moment I would be surfing at great speed down the face of a favourable wave the next I might be dodging the attentions of a hungry breaker from one side or the other. This battle between exhilaration and fright went on for over 7km and lasted for the best part of an hour. 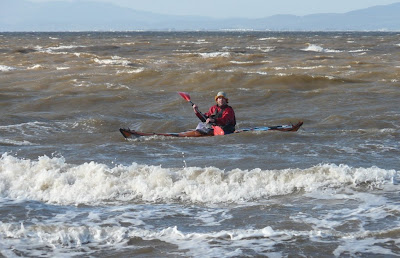 Relief at finding smoother waters close to the cumbrian shore was short lived. This is where the tidal stream runs at its strongest and we were still at risk of being swept north and completely missing our landing. Some keen paddling and a course change was the solution and we made landfall with great relief on the gritty beach south of Silloth after 13km in less than 2 hours.

I'd like to take this opportunity to thank Sean for his good company and for tollerating my snotty feebleness. His accounts and some more photos for the outward journey and the return journey are well worth a look.
Posted by Jim Krawiecki at 8:54 am 1 comment: