Double Kayak to the Isle of Man

Following a changeable Bank Holiday weekend the weather started to show signs of settling down a little. With this in mind Sean and I began finalising some long term plans for a crossing from St Bees in west to Ramsey on the Isle of Man. 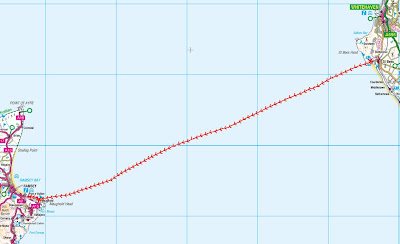 The Distance is 53 km, 33 Statute Miles or 28 Nautical Miles. I sent a fax to Liverpool Coastguard advising them of the details and booked the campsite next to the beach at St Bees, and some basic bunkhouse accommodation at The Venture Centre on the Isle of Man.

Kirstine generously volunteered to drive us to St Bees, act as a shore contact and wait around for the weekend in case we decided to return by the same means on the following day. 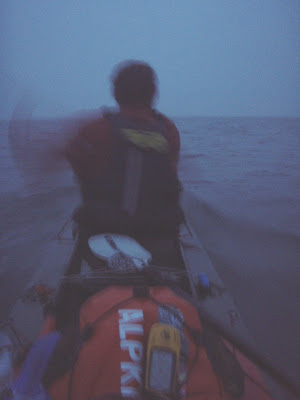 The tides dictated that we had to leave St Bees in the pre-dawn darkness at 3.30am. We expected the crossing to take 6-8 hours. I reported our position and average speed to the coastguard periodically so that we could be advised of any collision risk and as dawn broke we realised that visibility was only a mile or two at best. 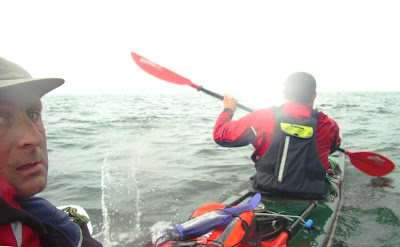 From an almost flat calm at St Bees the wind rose to a northwest force 4 giving quite choppy conditions making the boat a little tricky to handle.

Shortly after reporting in to the coastguard for the second time we saw a ferry pass about a mile in front of us then disappear back into the gloom. Our only other encounter with boats was with a sailing boat appropriately called ‘Night Cat’ around 5 miles from the Manx coast. The helpful skipper called across to us offering a bacon butty then pointing a finger west by southwest into the mist declaring that to be the way to Ramsey. 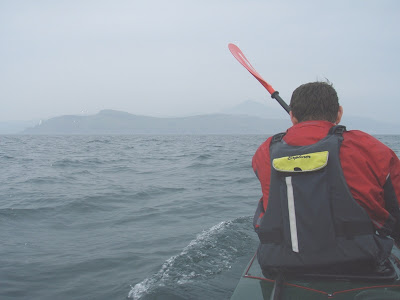 It wasn’t until we were within less than two miles of Maughold Head that we got our first real sight of land and after 6 hours and 15 minutes we landed on the seaweed infested rocky foreshore of Maughold Brooghs. After a short break we continued to our final destination, Port E Vullen where we unpacked the kayak and made our way for s well-earned rest at the near by Venture Centre.

The forecast for the following day gave easterly force 3-4 so rather than a slog into a headwind we decided on a more leisurely paddle along the coast to Douglas and catch the 3 o’clock fast ferry to Liverpool. Following a log like sleep we enjoyed a hearty breakfast of cheese toasties, grapefruit and muffins before setting off for the beach. Ahead of us lay a 26km paddle along some of the best lcoastline that the has to offer. 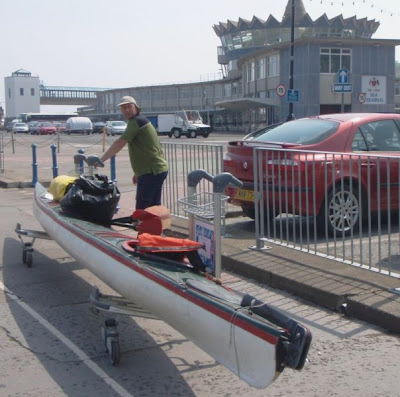 The paddling was uneventful and by Lunchtime we had landed close to the ferry terminal in readiness for an easier crossing. The ever helpful Kirstine met us on our arrival at Liverpool and we were all home in time for Tea.

Posted by Jim Krawiecki at 5:48 pm