Having been invited by the festival organisers to do some guiding and show some films, I had been looking forward to this event for a while. As soon as I arrived at the Anglesey Outdoors centre on the Friday evening I realised that this was going to be a wonderful get together. The Paddlers Return Bar was buzzing to the sound of excited voices in an eclectic mix of accents from around the UK and Europe. Hearty handshakes, big bear hugs and chinking pint pots went on late into the night. 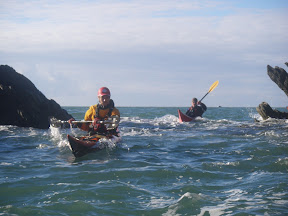 On Saturday morning I teamed up with Justine Curgenven to lead a group of intermediate paddlers from Rhoscolyn to Trearrdur Bay and back again. The gentle westerly breeze kicked up the race at Rhoscolyn into a challenging roller coaster ride so we didn't stay there for long. Instead we rummaged our way between, beneath and behind some unlikely parts of the Anglesey coastline.

Justine's talk in the evening was about her adventures with Barry Shaw in Tierra Del Fuego. Amazing photos, film clips and stories from two years of expeditions showed that even the best plans can leave unforeseen challenges. 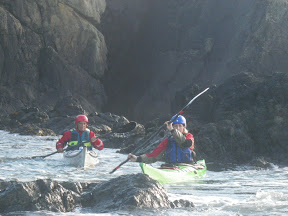 Sunday was sunny and calm. Olly Jay and I teamed up to lead a group along the west side of Anglesey. 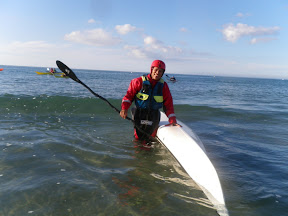 The rockhopping there was excellent and the sporadic swell added some extra challenges.

Later on Marcus Demuth gave a talk which was an amusing yet candid insight into how his steep learning curve led to some unexpected challenges on some of his expeditions. 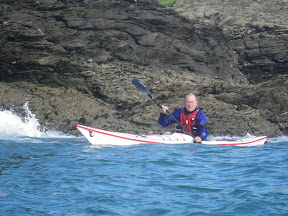 On Monday, the final guided trip was at Rhoscolyn with Mike Maybury. 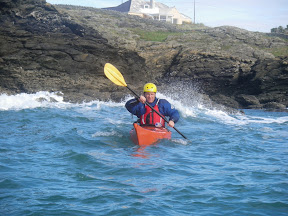 At first we found some excellent conditions for rockhopping but later the increasing swell made conditions difficult. We found ourselves staying away from the classic arches and gullies. 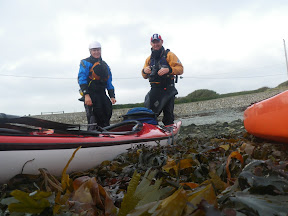 Since the weekend I have remained on Anglesey to join some of the BCU courses and enjoy the blustery conditions that Autumnal Anglesey has to offer.
Posted by Jim Krawiecki at 7:08 am No comments:

Sweden Part 3 - A Feast from the Sea 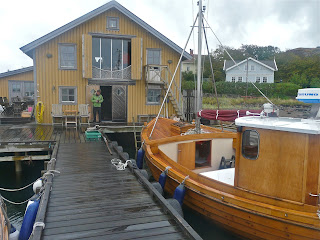 The prospect of poor weather hailed an early end to our sea kayaking adventures but there was one more surprise left. A break in the weather allowed us to visit Everts Sjöbod (Evert's Boathouse). 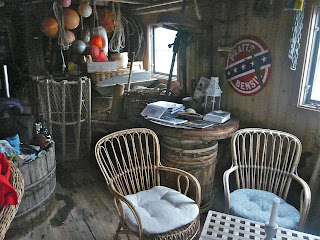 After we had explored the this old fashioned wooden building, we got dressed in all-weather clothing and climbed aboard the traditionally-built 1952 fishing boat 'Tuffa'. 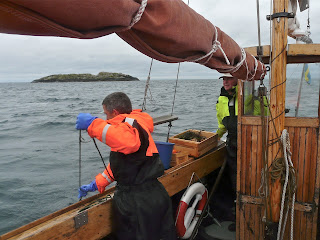 We were taken out to a more remote part of the coast where the lobster fishing is good to a site there baited lobster pots had previously been laid. Fishing has been in the family of our guide for many generations and he demonstrated how to haul up the pots. It was then my turn. Once I had successfully hooked the buoy I began to enthusiastically haul away. Our guide then called out "32 Metres!" I curbed my enthusiasm and drew in the line at a more sober rate. By the time the pot rose to the surface I was exhausted! Lobster fishermen must be much fitter and stronger than me. 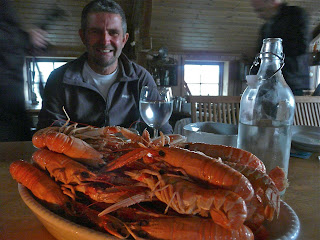 After collecting a good catch of lobster, crab and crayfish we headed back to the boathouse where a table had been laid. I'm pleased to say that the delicious spread that was laid out before us was a good match for our appetites. All that hard work on 'Tuffa' had developed a voracious hunger.
Posted by Jim Krawiecki at 7:57 am No comments:

The coastline of west Sweden is littered with hundreds of islands. The Bohuslan region is blessed with shores of smooth pink granite rock slabs and domes interlaced with intimate coves and secluded beaches. 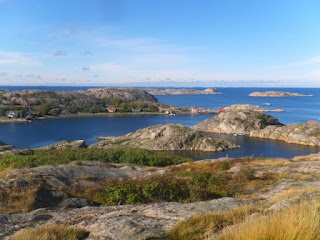 The shallow sheltered seas between the islands form a network of canal-like passages. This timeless labyrinth delivers an endless series of surprises. One shallow lagoon leads into to another then the next may lead to the open ocean, or a sleepy fishing village with a cafes and boat moorings. 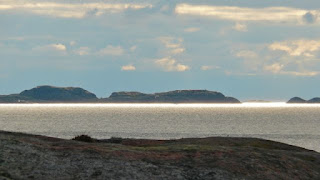 The paddling here is wonderfully laid back. With less than half a metre of tide, there are no currents to plan for and no long steep beaches to carry kayaks up and down. Over three miles offshore from the fringes of the inner archipelago lies Vaderoarna (the weather islands). They keep the really wild seas at bay whilst acting as a kind of holy grail for more experienced and adventurous paddlers. 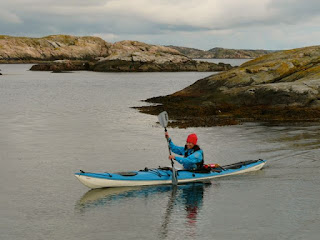 The pink granite rocks are beautifully enriched by the low red sunlight of dawn and dusk. In between these times the day time is for exploring, finding and discovering. 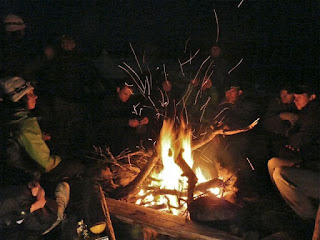 Wild-camping is the norm here. It is considered everyone's right to camp for at least one night. Many of the islands are uninhabited. However, it is possible to camp on many of the inhabited islands too. 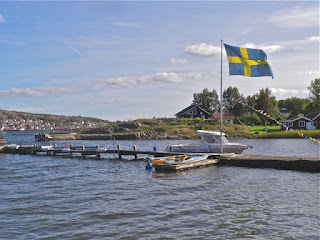 Hamburgsund, Fjallbacka and Grebbestad are the main towns along this stretch. Apart from providing a welcome diversion from wilderness, there are shops for re-supply as well as cafes and bars for rest and recuperation.

I was privileged to be guided for two and a half days along the Bohuslan coast by Ulrika Larsson of Green Adventures who specialise in kayak tours and training courses in these waters.
Posted by Jim Krawiecki at 10:34 pm 2 comments: