The Lancaster Round Revisited

I haven't been paddling along the Lancashire coast since my Northern England & Isle of Man guidebook was published in 2011. This is a trip that combines the sheltered tidal waters of the Lune Estuary with a stretch of the historic Lancaster Canal. 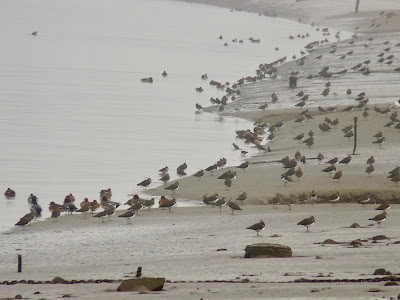 I met Amanda at Glasson dock beside the Victoria Inn. I was disappointed to find that the pub closed down several months ago. It is hoped that it will re-open soon but all too often, once these places close, that stay that way. We arrived in plenty of time and needed to wait for the tide to rise before we could launch. It was great to find the muddy estuary shore teeming with bird life! 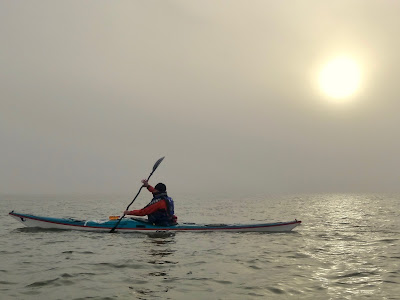 The launch was exciting. The fog was so thick we could't see the opposite shore so we took a couple of bearings and headed off into the gloom. In fact the fog was so thick that we lost sight of both shores within minutes of setting off upon the rising tide.

The strong currents brought us swiftly up the estuary towards another historic Lune side pub. The Golden Ball Hotel was known as 'Snatchems' during the 18th Century in the days of smugglers, pressgangs and the Lancaster 'hanging judges'.

Progress became a bit more difficult when we ran out of tidal assistance as we passed St Georges Quay and the centre of Lancaster. We pushed on beneath the Lancaster Millennium Bridge, Skerton Bridge and up to Skerton Weir. 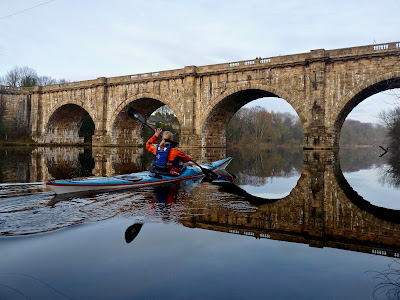 After portaging the weir we left tidal waters behind us. Next, it was time to stretch our legs (and other muscles) and trolley our kayaks 20 metres up on to the Lancaster Canal which is carried across the river by the 18th Century Lune Aqueduct. 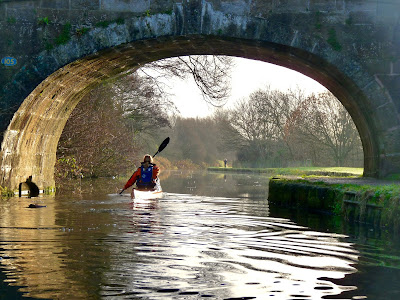 The canal then runs back through the middle of Lancaster, through deep wooded cuttings and out into rolling countryside. It was an eerie dusky scene with new mist beginning to settle in the hollows and on the water. Continuing towards the village of Galgate we watched a kingfisher catch his fish supper. We could only dream of ours because we were still over 9 kilometres from the end of our trip. 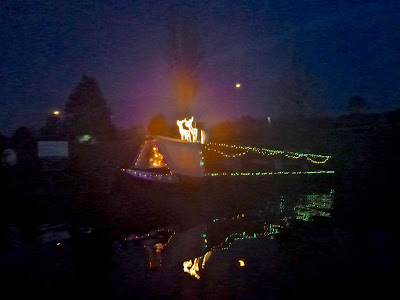 After reaching Galgate Marina in almost complete darkness, our final challenge was to make the right turn onto the Glasson Branch and complete the descent to Glasson Dock. It may only be 4 kilometres to the end but there are 6 locks to portage. Steep slippery banks are difficult enough in broad daylight but we had complete darkness and the thick mist made our head torches next to useless.

I'd like to take this opportunity to thank Amanda for her company on the trip; it was her idea! From the start in misty golden morning light we had an adventure with diverse settings and varied scenery all within a journey of 26 kilometres.
Posted by Jim Krawiecki at 7:10 pm No comments: